Predicting the Future… For our Kids

“… It’s tough to make predictions, especially when it’s about the future.”  –Yogi Berra

Perhaps one of the most difficult aspects of being a Chief Business Official (CBO) is the balancing act of gazing into a crystal ball as one crafts educated assumptions about future revenues while also remaining completely aware of current-year demands on existing dollars.   Anyone who has gazed at his bank balance trying to figure out how to replace the car that was just wrecked can perhaps understand how CBOs feel when faced with a new collective bargaining agreement or large expenditure.

Making these types of fiscal decisions is tough, and not all district CBO and management teams get it right.  During the 1980s, 27 California school districts found themselves with no cash for monthly payroll and oth

er legal obligations, requiring the California Legislature to loan California treasury dollars to these bankrupt districts. Subsequently in 1991, the Legislature passed AB1200 requiring numerous fiscal oversight actions.  Every California school district and COE now is required to make budget revisions at least two times a year, and to include multi-year projections two years into the future.  Since AB1200’s enactment, only 9 loans have been afforded to school districts in the last 25 years.

Although no CBO admits to possessing soothsaying abilities, most  CBOs utilize forecasting tools such as the School Services Dartboard and the Fiscal Crisis and Management Team’s (FCMAT) LCFF Calculator to assist with forecasting out-year revenues, such that a district or COE budget does not become fiscally overcommitted.  Despite these forecasting tools, CBOs experience a gut-check when making any large fiscal obligations that could potentially affect a district’s future fiscal solvency.

In good years when there are plenty of dollars coming from Sacramento, many people think that the CBO’s job is easier because there are dollars to relieve “pressure points,” but in actuality it’s harder.  CBOs have to balance growing fiscal demands while preparing for future school revenue reductions.  Joel Montero, retired FCMAT Executive Director, has summed  it up best by warning that “…it is the bad decisions made in good times that bite the district in bad times.” 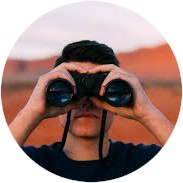 llenges, all CBOs look forward to LCAP development in order to make future expenditures realistic and sustainable.  Any CBO wants to know upcoming program demands well before LCAP budget development, such that those needs are addressed in a systematic, solvent and sustainable fashion, and every student benefits.

Keep all of this in mind when working with your district CBO during budget and LCAP development. It is not the present that keeps CBOs awake at night, but rather the future.